The History of Number Plates

The original private number plates were first issued back in 1903 and are now referred to as Dateless number plates. These plates are the most valuable of personalised number plates because the letters come first on them. Generally there are 2 or 3 letters followed by number that can go up to 9999 like PAE 365.
These are the most sought after number plates to buy.

The alternative to these type of private number plates are number plates known as Reverse Dateless private plates which are similar but with the numbers coming first. This makes them slightly less desirable but there are still plenty of people looking to buy these private plates, they work as follows, for 2 letters the numbers will range form 1 to 9999 and for 3 letters the numbers will range from 1 to 999.

The Suffix range of registration number plates were introduced by the DVLA in 1963. With these private number plates the last character being a letter, represents the year, these continued until 1983. Although these are not the most valuable something like DAV 1D would be worth a lot of money spelling out David and so would have plenty of people wanting to buy it.

Next in the process of issuing regaistration plates came the Prefix range of private registration plates. This range covers the years from 1983 to (March) 2001. With these plates the first character was a letter and this represents the year and would end with 3 letters.
This range of private number plates have become popular because the 3 letters can represent initials.

The current range of number plates known as New Style were released in September 2001 and will continue until 2099.

The way these work is not so simple because there are 2 sets per year, 1 for the first half of the year and the other is the 2nd half of the year. For example 04 represent the first half of the year 2004 and 54 would represent the later half of 2004. This style has two letters at the start and three letters at the end. This range of number plates have allowed for some interesting combinations like say RU55 ELL for the name Russell. You have to use your imagination for some of these plates but these can be great fun.

Finally Irish Registration Numbers are available to buy, they have no year indication but they include "I" or a "Z" in three letters that precede a number which ranges from 1 to 9999.

These have proved popular allowing to represent a set of initials in the private plate OR even a shortened name like BAZ 100.

The Irish registrations are often the cheapest type of registrations and will be sold as cheap registrations or budget registrations. They are very useful because they are dateless registration so can be assigned to any age of vehicle and because of the structure of their characters are automatically seen as a personalised number plate.

Irish registration plates are often amongst the cheapest private number plates available - they have all the benefits of dateless registartions, being able to be assigned to any age of vehicle, and having fewer characters than a 'standard' issue reg making it easily identifiable as personalised, but at a fraction of the price!

How do I buy Private Number Plates?

Search for a Perfect Plate

Because many registration marks carry an 'age identifier' which is the date when the registration was released, it is very important to check the age of the receiving vehicle before buying a private plate. This is because the DVLA does not allow newer registration marks to be transferred to older vehicles because this is making the vehicle look newer.

Along with the price of the number plate we also give an option to get a set of standard number plates made for you to put onto your vehicle.

Once you've found the private number plate you want to purchase, send through the enquiry to us which will have all the details on.

We check to make sure the number plate is still available and then will arrange with you for the best way for you to pay. 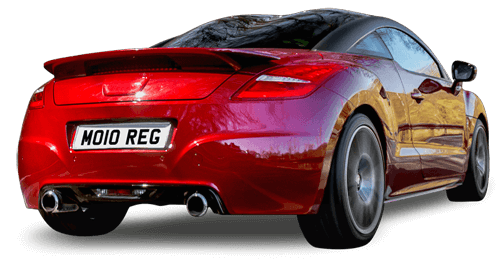 We are always available to discuss any matter

Motoreg is in no way affiliated to the DVLA or DVLA personalised registrations. DVLA is a registered trade mark of the Driver and Vehicle Licensing Agency.